SAVE, SAVE Foundation Name New Board Members

Abby Corbett, Michael Larkin, and Pavel Gonzalez named new members to the Board of Directors.

Safeguarding American Values for Everyone (SAVE) elected Abby Corbett, Michael Larkin, and Pavel Gonzalez to the Board of Directors at its monthly board meeting in April. Ms. Corbett and Mr. Gonzalez will serve on the board of SAVE Inc., the 501(c)4 political advocacy arm of the organization most known for its candidate endorsements, get-out-the-vote (GOTV) efforts, and field organizing to get pro-equality candidates elected and legislation passed. Mr. Gonzalez has a dual appointment with Mr. Larkin to the SAVE Foundation, which is the 501(c)3 arm that focuses on raising awareness and providing education on LGBTQ+ issues. 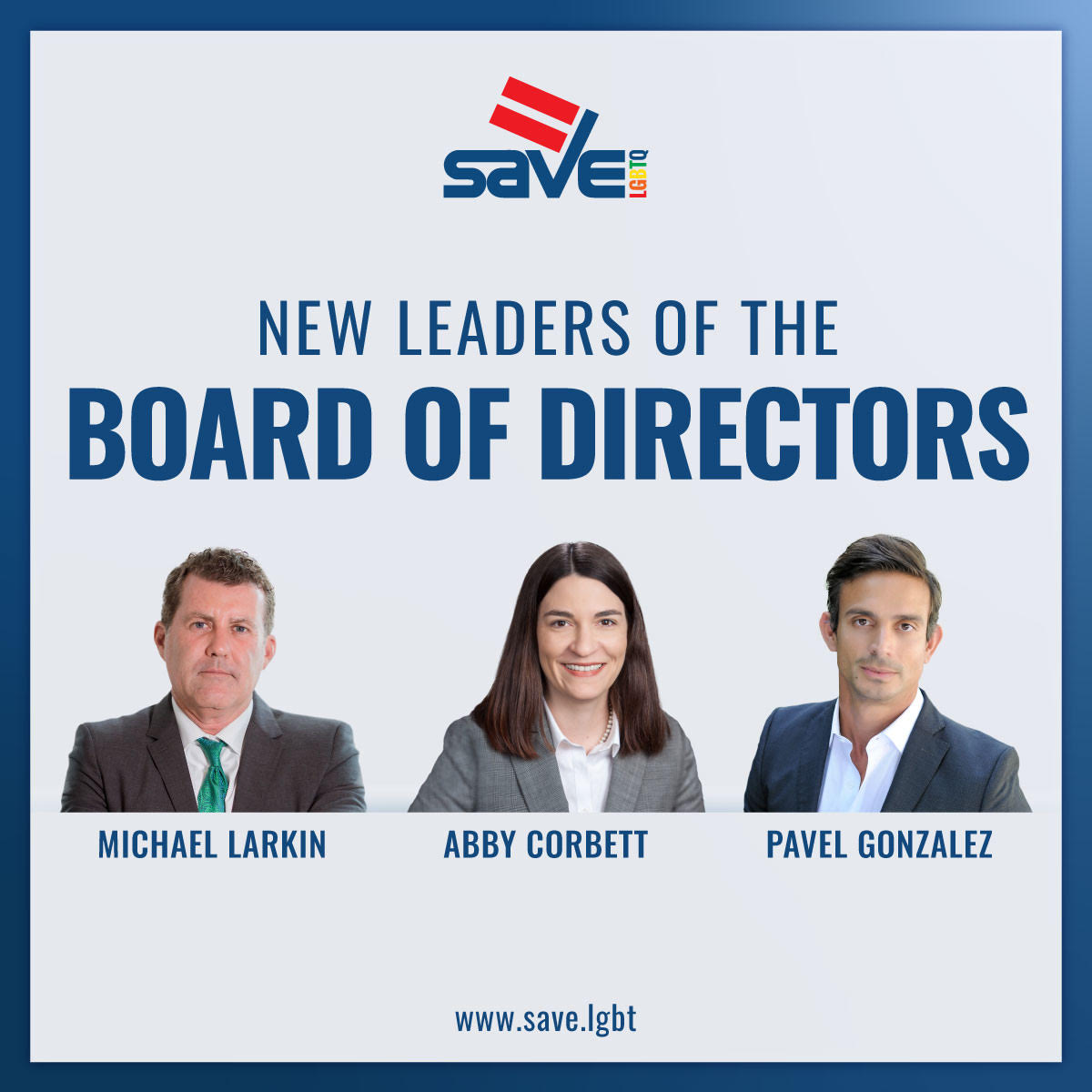 “Over the next few months and years, we will continue to grow and diversify the board with hardworking, thoughtful, caring, and civic-minded leaders from the community. Our board has done an amazing job in recent years and they are eager to take the organization to the next level. The new members reflect the board’s outreach to individuals with the caliber of intellectual power and warmth we will continue to seek,” explains Orlando Gonzales, SAVE/SAVE Foundation Executive Director.

This year SAVE’s strategic focus for 2020 is community engagement and get-out-the-vote. By focusing on efforts to get-out-the-vote, SAVE returns to its core competency on which it has built its reputation and political power through grassroots organizing. This year presents a unique challenge and opportunity with the onset of the coronavirus and the need for social distancing. “We are looking at innovative mixed-methods in engaging volunteers to connect with voters through safe in-person canvassing, phone banking, and social media,” remarks Justin Klecha, SAVE’s Deputy Director.

Michael Larkin has an active land use and zoning practice with Bercow Radell Fernandez Larkin & Tapanes specializing in representing clients before the various development review boards and City Commission of the City of Miami Beach and various other municipalities throughout Miami-Dade County. His practice extends to appellate litigation matters before the Eleventh Judicial Circuit’s Appellate Division and the Third District Court of Appeal. Prior to joining the firm and becoming a shareholder, he practiced with the land use and zoning group of Bilzin, Sumberg, Dunn, Price & Axelrod in Miami. Following graduation from law school, Michael clerked for the Honorable David L. Levy of the Third District Court of Appeal for two years. He graduated from the School of Foreign Service of Georgetown University (Bachelor of Science in the Foreign Service, 1989) and the University of Miami School of Law (J.D., Honors, 1995). While in law school, Michael was a member of the University of Miami Law Review, University of Miami Moot Court Board, Phi Delta Phi, and the Eugene P. Spellman Chapter of the American Inns of Court.

Pavel Gonzalez is a real estate advisor at Compass, a national technology-focused real estate brokerage. He specializes in residential real estate in Coconut Grove, Coral Gables, Miami Beach, Brickell, Downtown Miami, and the Biscayne Boulevard corridor. Pavel moved to Miami from Argentina in 2002, quickly settling in and carefully studying the intricacies of the neighborhoods in the city to strengthen his ability to serve his clients. Prior to this, he was an electrical engineer at a winery in Mendoza on the foothills of the Andes. There, he interacted with travelers from all over the world where he was inspired to expand on his native Spanish and hone his skills in English and Italian. He holds a degree in electrical engineering from the University of Buenos Aires.

SAVE (Safeguarding American Values for Everyone) is recognized as South Florida's leading organization dedicated to protecting people who are lesbian, gay, bisexual, transgender, and queer (LGBTQ) against discrimination. Since 1993, SAVE has advocated for equal rights for persons of all sexual orientations and gender identities through political advocacy, community outreach, and public education. Starting with the landmark passage of Miami-Dade's Human Rights Ordinance in 1998, its expansion to protect the transgender community in 2014, and the litigation spearheaded by SAVE which resulted in marriage equality in Florida in January 2015. SAVE continues to lead the fight for LGBTQ equality. Its mission is to promote, protect and defend equality for the LGBTQ community in Florida and its vision is to have a community where people who are LGBTQ have full equality in all facets of life.