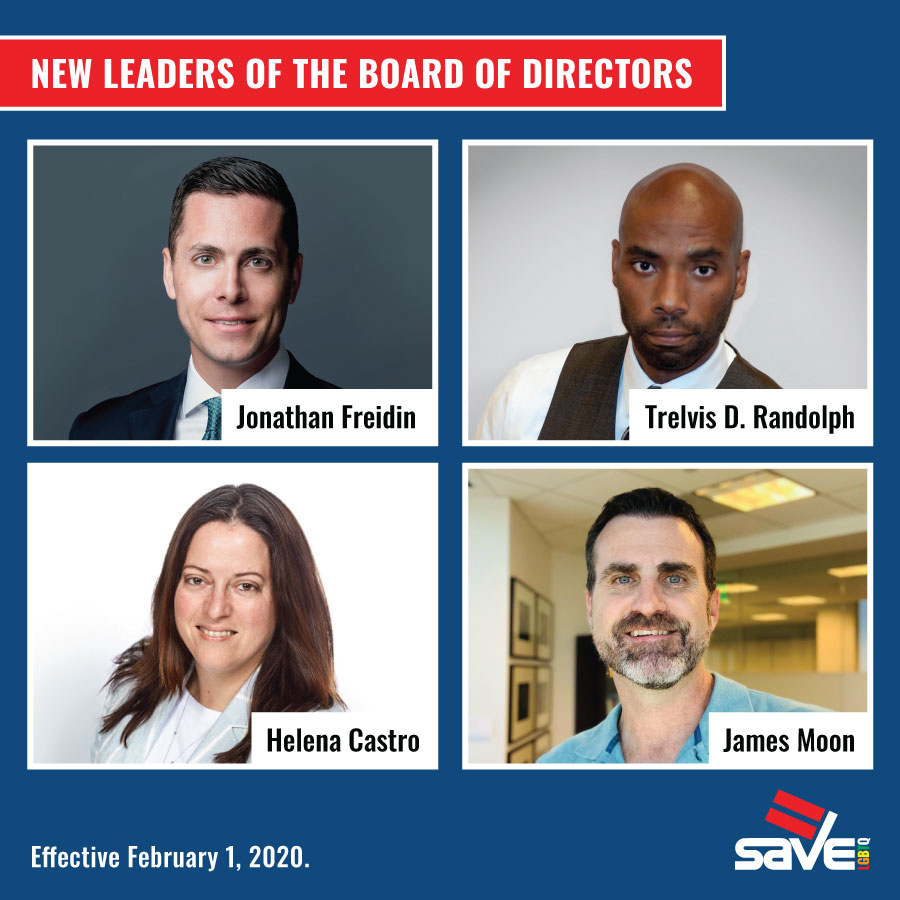 I wanted to give you an important update. At our monthly board meeting earlier this month, Safeguarding American Values for Everyone (SAVE) named Jonathan Freidin as Chair and Trelvis Randolph as Vice-Chair of the Board of Directors for SAVE Inc., the 501(c)4 political advocacy arm of the organization most known for its candidate endorsements and field organizing to get pro-equality candidates elected and legislation passed. The SAVE Foundation, which is the 501(c)3 arm that focuses on raising awareness and providing education on LGBTQ+ issues named Helena Castro as Chair and James Moon as Vice-Chair.

Elizabeth “Liz” Regalado and Brian Adler stepped down from their leadership roles as chairs of SAVE Inc. and the Foundation, respectively, and will remain active as board members.  We are grateful for the years of leadership and service that Liz and Brian provided the organizations. Together they saw the organization through major milestones, successes, and challenges for our community and the organization.

Leading up to this change in board leadership, SAVE has announced that its strategic focus for 2020 is community engagement and fieldwork. By focusing on the field, SAVE returns to its core competency on which it has built its reputation and political power through grassroots organizing.

We are ready to put in the work to get SAVE and the LGBTQ community ready for 2020. This year’s elections will have a profound impact on all of us, so our top priorities are to make sure we elect pro-equality candidates and counter the hatred and bigotry coming out of Tallahassee and Washington. To do this, we’ll be activating with an ‘all-hands-on-deck’ approach, and I hope the entire LGBTQ community and allies will come together and join us.

You can read our new leadership bios below. Please join me in welcoming them to their new positions.

Trelvis D. Randolph is a partner in the Miami law office of Quintairos, Prieto, Wood & Boyer, P.A. He focuses his practice on all matters relating to general liability litigation, including cases involving claims of personal injury from automobile accidents, slip and fall cases, negligent security, wrongful death, product liability, medical malpractice, nursing home and assisted living facilities malpractice, and retail, restaurant and hospitality industry defense. Mr. Randolph received his  Juris Doctor degree from Cecil C. Humphreys School of Law at The University of Memphis. In addition to his involvement with SAVE, he currently serves as the President-Elect of the Wilkie D. Ferguson, Jr. Bar Association; and also serves as General Counsel of the Miami-Dade Branch of the NAACP.

Helena Castro has been an educator for almost 25 years in the Miami Dade County Public Schools as a social studies teacher and for the past 14 years as a Student Activities Director. As an educator, she has worked with a diverse population of students and faculty, representative of our rich community, and thus has witnessed the growth in advocacy and representation of our LBGTQ peers. Helena grew up in Hialeah, Florida where she became immersed in local politics and grassroots campaigning. After marriage equality came to Florida, Helena married her wife, Yvette in 2016.

James “Jim” Moon is an attorney who handles a wide variety of complex civil and cross-border litigation matters in both state and federal courts for national and international clients. He has handled all aspects of litigation from inception through trial and appeals to the 11th Circuit Court of Appeals. He has litigated matters that include prosecuting and defending foreclosure actions, pursuing contract and tort claims against large financial institutions such as banks and their professionals. Additionally, he has pursued and defended against all manner of fraudulent transfer and preference litigation in both state and federal courts. In addition, Jim represents debtors, panel trustees, official and ad hoc committees and individual creditors in complex bankruptcy cases brought under chapter 11 and chapter 7 of the Bankruptcy Code. As a community leader and activist in the LGBTQ community, Jim serves as Vice Chairman and national board member of “A Wider Bridge,” a national civil rights organization advocating for LGBTQ rights inside Israel and support for Israel among the community of nations. He has also served on the board of the Outshine Film Festival. Furthermore, Jim has been recognized as an advocate for Israel by AIPAC, lecturing and writing about the progressive case for support for the State of Israel. Jim has served on the SAVE board since 2018.