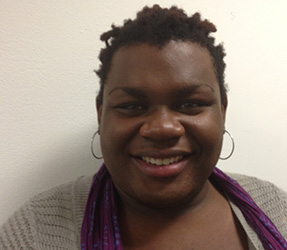 Meet Alaine Jolicoeur.  Born Marc Jolicoeur in a Haitian suburb, she is a rising senior at Rollins College in Winter Park, Florida, currently majoring in Philosophy with a double minor in French Literature and Women Studies. Alaine did not always know she was a transwoman.  At age eight she recalls coming upon an encyclopedia entry about homosexuality and coming to the conclusion that she identified as such after gaining an understanding of the concept.

In 2011, Alaine began to explore whether her identity conflict ran deeper than just coming to terms with her sexual orientation.  After reading She’s Not There, the autobiographical nonfiction work by Jennifer Finney Boylan about coming out as a transwoman in the midst of a stable marriage, Alaine was convinced that she was not actually a gay man, but rather, a transwoman attracted to men.  From that point forward, she recognized to herself her true identity as a transwoman, but it would be a few more years before she would reveal her true identity for the world to see.

During the summer of 2012, Alaine worked as an Intern for the Men, Children and toys department at a local Marshalls.  “I remember sometimes I would work, and I would wear pullover sweaters with my hair pulled back, and people would call me ‘miss’ constantly, and that just sparked something,” she remembers. “I liked it. And I truly enjoyed it.”

It was not until her trip to Europe later that year that Alaine would finally embrace her womanhood permanently and publicly.  “Reality hit me because I remember going into the men’s room,” she says of her experience bumping into a gentleman in the restroom after arriving in Spain.  “It was the confusion of my presentation. He was just trying to help me. He was like, ‘Hey miss, you’re in the wrong restroom.’”

A few days later, upon checking into her hotel room in Geneva, Switzerland, the concierge addressed Alaine as ‘miss.’  She considers her internal decision not to correct the attendant to use the male pronoun as the very moment she completed the process of assuming her rightful gender identity. Alaine says it has taken her mother some time to come around to accepting the change but that now she is supportive.  Ever since that fateful trip to Europe, she’s never looked back.  “I have never been this happy,” she affirms, “I’m fully myself.”

After a few months in Europe, Alaine returned to school at Rollins with a new sense of empowerment to effect changes on campus.  “I started to push for accommodations,” she says, “not just for myself but for others in the future.” Alaine proudly claims as an achievement her advocacy for the establishment for gender-neutral housing open to anyone who doesn’t have qualms with sharing the facilities with individuals of other genders.  Her next goals include pushing for official name changes on school documents for trans students and hosting forums on queer issues.

In spite of her successes since transitioning, Alaine still encounters discrimination on the streets of Miami-Dade County.  She describes a recent bus ride home in which two riders commented on her presentation.  “These Haitian ladies were looking at me, and I could understand what they were saying, and they were like, ‘Does this look like a boy or a girl?’ and going on and on,” she recalls. “I felt angry and bitter. And I think knowing that I do not have protective rights from the police, scared me and saddened me. I mean, what if they came and attacked me? I’m a bit scared sometimes, how will my rights be protected?”

Alaine says that Miami-Dade County is long overdue for a trans-inclusive Human Rights Ordinance, and not just for her own protection.  “If there’s no protection,” she points out, “Miami-Dade is going to keep on losing human capital needed to grow and maintain the economy. It’s one of the reasons why I am not interested in moving back Miami-Dade after completing my degree.  I want to live in an environment where I feel accepted.”

Alaine believes that if Miami-Dade County does not want to drive away people like herself, it is imperative for the County Commission to add trans-inclusive language to the pre-existing Human Rights Ordinance.  She strongly endorses SAVE Dade’s efforts to rally the commission to pass the amendment and has signed on to the organization’s TransEquality campaign to lend her voice to the effort to achieve the needed change.