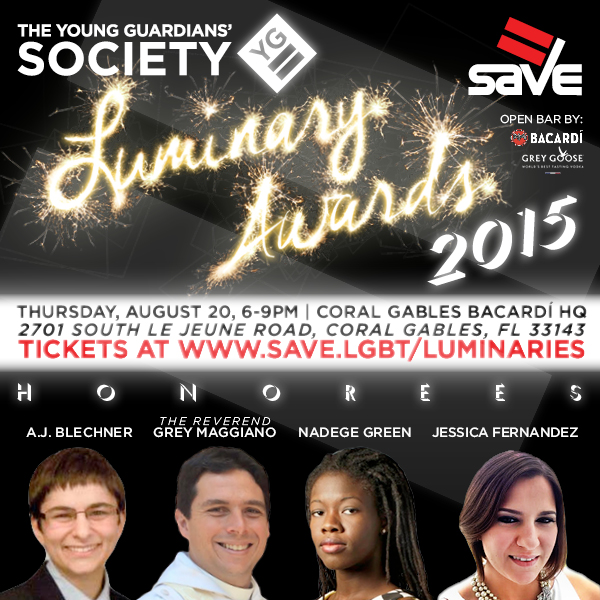 On the evening of Thursday, August 20, SAVE will honor four of South Florida's brightest young professionals working towards a more equal future for South Florida's LGBT community.

The Young Guardians' Luminary Awards, to be held this year at the Bacardí headquarters building in Coral Gables, were created to recognize the important work of young activists, as well as to provide an opportunity for the next generation of LGBT trailblazers to meet those who came before them.

It’s been such an amazing year for equality, with huge victories for transgender rights and the freedom to marry. None of these advances would have been possible without young leaders like our 2015 Luminaries fighting the good fight at the front lines of the battle for equality.

We're proud to announce that SAVE's 2015 Luminaries of Equality are:

A.J. Blechner, for his tireless dedication and long-term commitment to SAVE’s transgender prejudice reduction initiative as a volunteer canvass leader and advocate for transgender justice.

Father Grey Maggiano, for his unwavering commitment to LGBTQ equality as a value of the faithful in his role as Associate Rector at Trinity Episcopal Cathedral in downtown Miami. In his short time at the Cathedral, Father Grey has worked with the Cathedral leadership and the Bishop’s Office to expand efforts around equality inside and outside the church walls.

Jessica Fernandez, for her innovative efforts to grow support for LGBTQ equality in South Florida by engaging constituencies traditionally overlooked by the movement in her position as President of the Miami-Dade Young Republicans and co-owner of the Miami public affairs consultancy AI Advisory.

Nadege Green, for her highly accessible and carefully-sourced coverage of developments in the local LGBTQ equality movement, as well as her reporting on the plight of queer Americans in general, as an award-winning journalist and producer for the Miami Herald and WLRN.

It would be our pleasure if you would join SAVE on August 20 as we honor these trailblazers lighting the way to equality for LGBTQ South Floridians.

You don't want to miss this elegant event! With an exclusive penthouse event space overlooking downtown Coral Gables AND open bar all night long provided by Bacardí, it's sure to be our best ceremony yet!

Nothing we've achieved in recent months has been possible without supporters like you. We hope you will join the SAVE family on August 20th as we celebrate the young professional LGBTQ equality activists working at the forefront of the movement to make the world a better place for everyone.