ANNOUNCING: Our 2015 Champions of Equality! 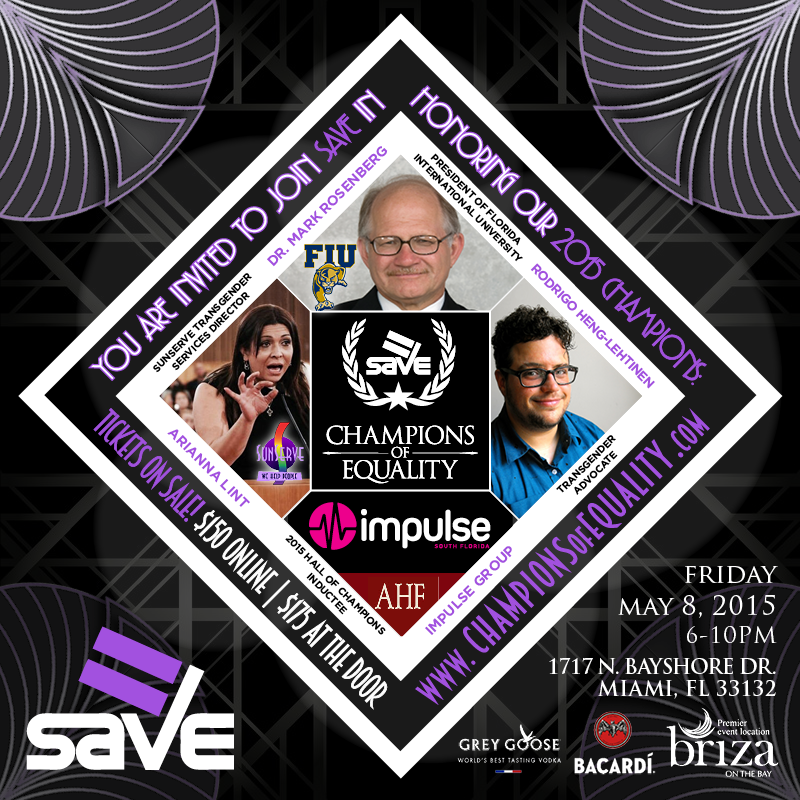 SAVE and SAVE Foundation are proud to announce today their 2015 Champions of Equality to be honored May 8 at the local LGBT advocacy organization’s tenth annual awards reception and gala.

SAVE established the Champions of Equality awards reception in 2005 to honor people who have significantly advanced the cause of equality for the lesbian, gay, bisexual, and transgender (LGBT) community in South Florida. The event's honorees this year include transgender advocate Rodrigo Heng-Lehtinen, local trans activist Arianna Lint, and Florida International University President Dr. Mark B. Rosenberg.

Rodrigo Heng-Lehtinen made waves late last year by appearing with his mother, Florida Representative Ileana Ros-Lehtinen, for an interview on Miami's CBS4 WFOR in which the two discussed their experiences as the transgender child of a congresswoman and the mother of a transgender child, respectively. Rodrigo Heng-Lehtinen, born Amanda, is an openly transgender man who currently works for the Gay & Lesbian Alliance Against Defamation. His mother Ileana is known for being an outspoken supporter of LGBT rights in the U.S. House of Representatives, and is a founding member -- and currently the only Republican member -- of the LGBT Equality Caucus of the U.S. Congress.

"We know Rigo as our child, whether it’s Amanda or now as Rodrigo," Ros-Lehtinen told interviewer Jim Defede, advising parents of transgender children not to "freak out" and adding that parents should love their kids no matter what, "because that is your child…never reject your child."

Speaking about his coming out as a transgender man -- the son of a leading United States congresswoman no less -- Rodrigo admitted that "no one else may have known," but that he was proud to be "sharing that honesty with other people for the first time." The joint appearance was hailed as a great leap forward for the visibility of the trans community locally and nationally.

SAVE's is proud to honor as its second Champion of Equality this year Dr. Mark B. Rosenberg, who served as served as chancellor for the Board of Governors of the State University System of Florida from 2005-2008, and has served as the President of Florida International University since 2009. During his tenure at the head of FIU, the school has taken a leading role in the movement nationwide to make college campuses more affirming and accepting towards LGBTQ students and applicants.

Under Dr. Rosenberg's direction, FIU founded and expanded its office of Multicultural Programs and Services (MPAS) LGBTQA initiatives, which strives to reduce homophobia and heterosexism on both FIU campuses through education, advocacy, and awareness. The program contributes to an open campus climate that is safe and accepting for all members of the University community regardless of sexual orientation.

Arianna Lint is another transgender activist being honored as a Champion of Equality for her role in increasing the visibility of the trans community as the Director of Transgender Services for Broward County's very own SunServe. Over the past year, she has been a fearless advocate on behalf of transgender rights as one of SAVE's most prolific spokespersons, appearing on multiple occasions before the Miami-Dade County Commission to speak passionately in favor of non-discrimination protections for the trans community.

Arianna also made her mark this February at the National LGBTQ Task Force's Creating Change conference in Denver, where she stormed the stage at the opening plenary address alongside [email protected] Coalition president Bamby Salcedo and over 100 activists, demanding representation and employment of transgender individuals by LGBTQ nonprofit organizations. The demonstration generated national headlines and was hailed as a turning point for the trans rights movement.

In addition to the three Champions of Equality honorees, SAVE will induct into its Hall of Champions the HIV/AIDS prevention organization Impulse Group, a project funded in part by AIDS Healthcare Foundation with chapters in eight cities across the globe, including one based in the LGBT destination city of Ft. Lauderdale, and another planned to open soon in China. Ft. Lauderdale chapter director A.J. Alegria will accept the award on behalf of the organization, which SAVE recognizes for its work in raising awareness and reducing transmissions of HIV and other sexually transmitted infections among some of South Florida's most at-risk communities.

“It’s SAVE’s honor to recognize these leaders this year,” said SAVE Executive Director Tony Lima. “In their own ways, Rodrigo, Arianna, and Dr. Rosenberg have all made invaluable contributions to the cause of LGBTQ equality over the past year. And, of course, I’m so proud to have the privilege of recognizing Impulse Group for its work in stoping the spread of HIV and other sexually transmitted infections in the local LGBTQ community.”

This year’s Champions of Equality reception will be held Friday, May 8th, from 6 - 10PM at the lovely Briza on the Bay event space located at 1717 North Bayshore Drive on Biscayne Bay in Downtown Miami. This year’s event will feature music by DJ Maximus 3000 and spirits sponsored by Grey Goose and Bacardi, which will be offering its full repertoire of brands for guests to enjoy at the open bar all night long. Tickets to the event are $150 online in advance and $175 at the door and are currently available for sale at www.championsofequality.com.