Announcing our 2016 Luminaries of Equality!

The 4th annual Luminary Awards will be held again this year atop the Bacardí headquarter building in Coral Gables on Thursday, August 18, from 6-9PM. Tickets are now on sale at the presale price of $50 at www.save.lgbt/luminaries.

In the face of what has often been an uphill battle to defend the rights of our community, these five leaders have bravely stood up to help further LGBTQ equality.

None of what we've achieved for equality over the past year would have been possible without young leaders like our 2016 Luminaries fighting the good fight at the front lines of the battle. We’re so proud to honor them this August.

Will you join us as we honor Brotha Ben, Commissioner Flippen, LJ, Jason, and Lutze on August 18? Click here to buy your presale tickets now. >>

Scroll down to read more about our 2016 Luminaries of Equality honorees:

Ben Evans III, is a Baptist minister, motivational speaker and Managing Director of BMe Community where he oversees the execution of a national campaign strategy to build caring and prosperous communities inspired by Black men. Last year, Ben made headlines when he came out as gay in a column posted on The Root, the popular online magazine covering the Black community.

Ben has over 10 years experience in public, government, and business relations. He is a graduate of Florida A & M University where he received his bachelors in accounting and masters of business administration. He is immediate past chair of the South Florida Youth Summit and served as Youth Pastor and Vice President of the Board of Directors of Bible Based Church. Benjamin currently leads a national tour for the book REACH: 40 Black Men Speaking on Living, Leading and Succeeding by Ben Jealous and Trabian Shorters and Forwarded by Russell Simmons.

Justin Flippen is a Broward County native with a long record of leadership in South Florida. After receiving his law degree from the University of Florida, he worked as a legislative assistant, eventually working his way up to winning election as Commissioner of Wilton Manors in 2008. He served a term as Vice Mayor and was re-elected handily in 2014.

When marriage equality became legal in 2015, Justin officiated the Valentine's Day marriages of nearly 40 couples at city hall as part of a city-sponsored marriage equality mass wedding program called We Do! He successfully worked to have Wilton Manors become the first city in Broward County to raise the Pride Flag outside a city hall for National LGBT Pride Month and then less than a year later to have Wilton Manors become the first city in the nation to permanently raise the Pride Flag as the foundation to a monument and memorial dedicated to the contributions of the LGBT community and their allies. In 2016, he supported a measure directing the City to look into how to fund transgender health insurance benefits, and he led the initiative for Wilton Manors to be the first city in Broward County and one of the first in Florida to ban conversion therapy on minors.

Landon ("LJ") Woolston is an advocate and activist, artist, youth worker, a trans-pan-queer Miami native, and a 2015 Point Foundation Scholar. LJ received his Master of Social Work degree from Florida International University, and is dedicated to using his privilege to interrupt oppression, standing alongside and amplifying the narratives of those who are most marginalized in our communities.

For the last three years, LJ has served as the Homeless Service Liaison for Project SAFE, a collaborative program between Pridelines and The Alliance for GLBTQ Youth. In his role, LJ provides direct service, training, and ongoing advocacy, acting as both a resource and a voice for LGBTQ young people experiencing homelessness in Miami. In addition to his work and social justice advocacy, LJ uses his photography as activism, as a radical medium for trans/queer folk to explore themselves and to document their varied paths toward self-discovery, body-love and self-love.

Across his work, volunteerism, and activism, LJ is most committed to affirming and empowering queer youth. By equipping young people with community support, resources, and knowledge around self-advocacy, LJ hopes to see the eventual elimination of the many barriers that prevent LGBTQ youth from living whole and authentic lives.

Jason started working for AIDS Healthcare Foundation (AHF) in 2010 in the organization’s pharmacy division where he discovered his passion for patient advocacy. Jason now serves as Advocacy and Legislative Affairs Manager in AHF’s Southern Bureau, where he leads local and nationwide advocacy efforts and maintains relations with state and federal officials. He is a member of Impulse, a national HIV prevention group funded by AHF for sexually active gay men 18 to 35.

Jason has been HIV positive for 10 years and aims to have an active role in reducing stigma that revolves around HIV/AIDS especially in the gay community. In his free time, Jason is a runner, a Pride Center volunteer and a classical pianist. Jason was also named the ADAP Advocacy Associations’s (aaa+) 2011 Emerging Leader of the Year.

Lutze is the former Program Director of MCCJ. She has led MetroTown, a week long social justice camp for high school students, for which her work received recognition in the Miami Herald. Teens describe the camp as a life-changing experience. Lutze truly pours her heart into making it a safe space for all regardless of race, gender, gender expression, sexual orientation, and physical ability.

She recently joined the Miami Workers Center as the Gender Justice organizer, where she is responsible for developing a comprehensive sex education campaign to be implemented in Miami-Dade County public schools. She also helped coordinate and facilitate the Community Circle for Black Lives in the wake of the murder of Philando Castile and Alton Sterling. She also extended her services to Pridelines to facilitate a circle for those who are LGTBQ and who work with LGBTQ youth in hopes of healing the healers in the wake of the tragedy at Pulse Nightclub in Orlando.


Bacardí is proud to sponsor SAVE's 2016 Luminary Awards. Luminaries 2016 guests will enjoy an open bar with full selection of Bacardí repertoire of spirits and beverages. 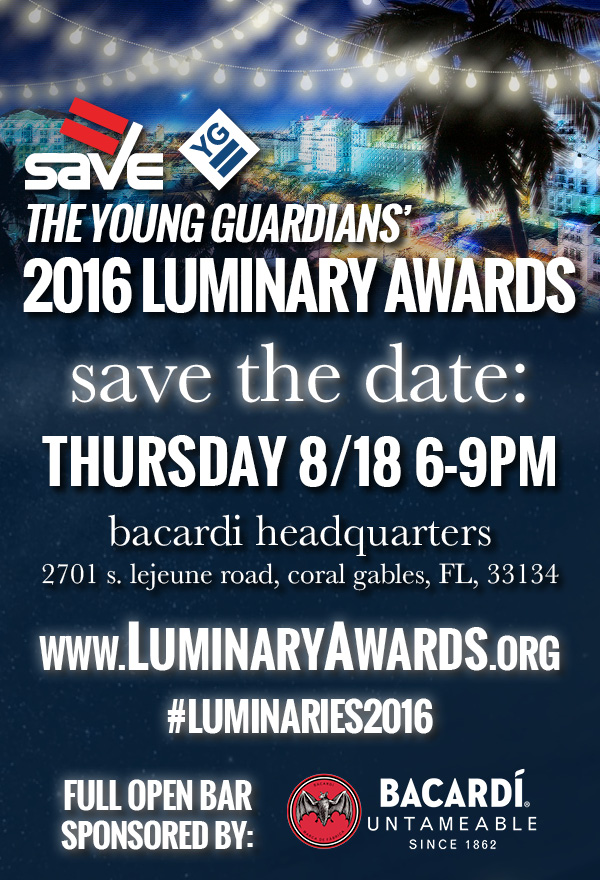 Thank you for your support. We'll see you August 18!