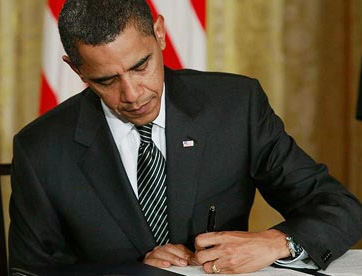 Today, the Obama administration issued an Executive Order banning employment discrimination by federal contractors on the basis of sexual orientation or gender expression.

This order will protect more than a million LGBT Americans employed by companies doing work for the federal government.

SAVE strongly agrees with the President's position that "all Americans, LGBT or not, should be treated with dignity and respect." However, while it's a huge step, in the 29 states like Florida with no workplace protections for LGBT workers, only those working for businesses doing work for the federal government will benefit from the order.

Stand TOGETHER with SAVE as we fight for protections from discrimination for ALL Floridian workers. Sign the petition today!

Until all South Floridian workers are protected, we will continue to advocate for all-inclusive anti-discrimination policies like the proposed update to Miami-Dade County’s Human Rights Ordinance, the Florida Competitive Workforce Act under consideration in the state legislature, and the Employee Non-Discrimination Act currently before the U.S. Congress.

The President’s action serves as an example to the states and municipalities where discrimination remains legal. In those places, like Miami-Dade County, the reality will persist that L, G, B, or T employees of businesses not contracting with the federal government will continue to have no legal recourse against discrimination.

Please stand TOGETHER with SAVE this critical election year to ensure protections from discrimination for ALL Floridian workers. Add your name now!

P.S. -- Already signed? Want to take the next step? DONATE or VOLUNTEER today!

We need your help now more than ever to double down our efforts to win the battle this year.

SAVE and the ACLU of Florida have challenged Florida’s refusal to recognize the marriages of same-sex couples performed out of state. We'll need all the help we can get to win the rights we deserve. For more information, go to savedade.org/savemarriage. 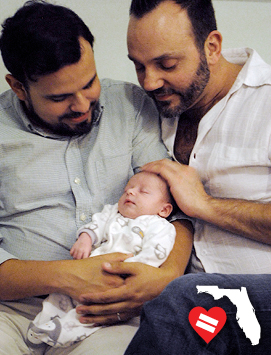 When my husband Tom and I sued alongside SAVE for recognition of our marriage from our home state of Florida, we also did it for our son Lucas.

That's why it hurt to hear that Florida Attorney General Pam Bondi wrote that her and Governor Rick Scott's opposition to marriage equality is about making sure kids are "raised by...mothers and fathers" in "stable and enduring family units."

Attorney General Bondi: the right way to raise a family is with love. Same sex parents are equally capable of raising families. And after 6 years together, we are a stable family unit.

Help SAVE fight the attacks on LGBT families like mine. Please donate today.

SAVE stands at the forefront of securing the rights we deserve. Click here to read more about their #SAVEMarriage initiative. 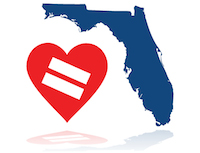 Thank you for your support,

Juan del Hierro,
for SAVE 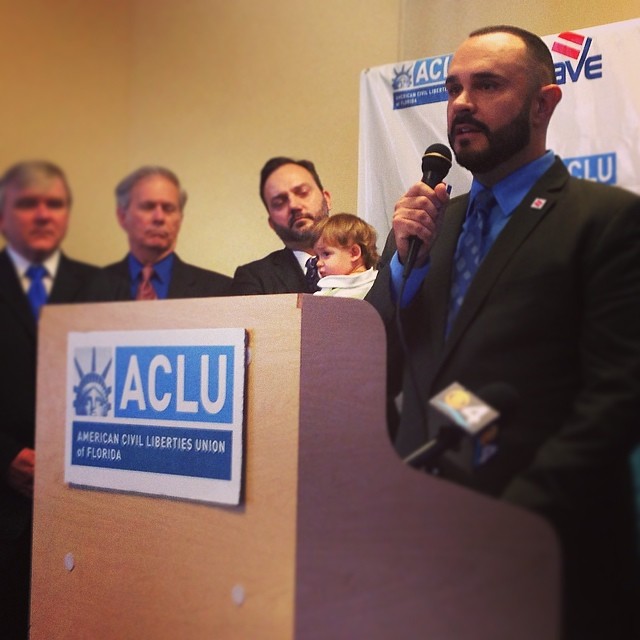 The American Civil Liberties Union (ACLU) of Florida has filed a response to the state of Florida’s motion to dismiss the ACLU and SAVE's lawsuit challenging Florida’s ban on the recognition of the marriages of same-sex couples.

The lawsuit, filed in March 2014, challenges the state’s refusal to recognize the marriages of same-sex couples performed out of state. It names Florida Governor Rick Scott, Attorney General Pam Bondi, and two other state officials as defendants.

“Florida's discriminatory laws cause serious harm to real families across the state,” said ACLU of Florida staff attorney Daniel Tilley, who is lead counsel in the case. “Despite the state's assertion that the harms to same-sex married couples aren't significant enough to warrant relief, the families living every day being treated like legal strangers by their home state know better.”

"As the voice of South Florida's LGBT community, we at SAVE know this issue affects many loving, committed same-sex couples married elsewhere but currently living in Florida," explained SAVE Executive Director Tony Lima, "and that's why we're confident the state will fail before the court in its motion to avoid the issue by having the case dismissed."

The ACLU of Florida’s response, filed with the Court on May 27th, says that the state’s motion to dismiss largely ignores the U.S. Supreme Court’s majority opinion last year in U.S. v. Windsor, the ACLU case in which the Supreme Court struck down the federal “Defense of Marriage Act.”

A copy of the response is available here: http://aclufl.org/resources/grimsley-v-scott-response-to-motion-to-dismiss/

For more information about the case, including ways to get involved, go to: www.savedade.org/savemarriage.

On Wednesday, May 21, 2014, high school students from across ‪Miami-Dade County came together for an evening benefiting four local Gay-Straight Alliances. 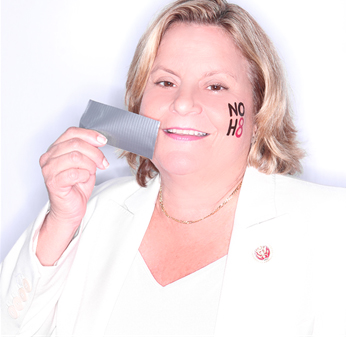 SAVE commends Miami-Dade U.S. Representative Ileana Ros-Lehtinen for her sponsorship of the Social Security & Marriage Equality (SAME) Act, which if passed would ensure that all same-sex spouses receive equal treatment when applying for Social Security benefits regardless of the state in which they live.

“This bill would bring parity to the benefits that same-sex married couples in South Florida and across the nation deserve," explains Ros-Lehtinen. "Every individual, regardless of gender identity or sexual orientation, should be able to receive equal treatment, and I’m proud to stand for the ability of South Floridians to be treated equally.”

SAVE has long counted among its strongest allies in Washington Rep. Ros-Lehtinen, who introduced the legislation in the U.S. House of Representatives along with Reps. Ron Kind (WI), Allyson Y. Schwartz (PA) and Elizabeth H. Esty (CT). Ros-Lehtinen received the honor of Champion of Equality from SAVE in 2010, and the organization most recently endorsed her in 2012 for election as the representative of Florida's 27th congressional district in Miami-Dade County.

"Representative Ros-Lehtinen is a key ally for South Florida's LGBT community in Washington, DC," says SAVE Executive Director Tony Lima. "Her proactive support for LGBT people has helped make into law many pro-equality proposals like the SAME Act. This step in the right direction is another reminder that fairness is not a partisan issue."

Ros-Lehtinen was one of the founding members of the LGBT Equality Caucus in the House, as well as an early supporter and the first Republican cosponsor of the Don't Ask, Don't Tell Repeal Act of 2010 and 2011's Respect for Marriage Act aimed at repealing DOMA. She also sponsored the Domestic Partnership Benefits and Obligations Act and voted against the Federal Marriage Amendment, which if passed would have banned marriage equality in all 50 states.

If signed into law by President Obama, the SAME Act would amend the Social Security Act to grant survivor benefits to any person legally married anywhere in the United States, regardless of whether he or she lives in a state with marriage equality.

SAVE considers passage of the SAME Act an important step on the road to marriage recognition in Florida as part of the organization's #SAVEMarriage initiative which began earlier this year with the filing of a federal court case aiming to achieve recognition from Florida for same-sex marriages performed out-of-state.

SAVE will continue monitor the progress of the proposal as it makes its way through the U.S. Congress.

SAVE statement on anti-LGBT comments by Rep. Van Zant Florida State Representative Charles Van Zant's comments characterizing new standardized testing in public schools as a scheme to "attract...children to become as homosexual as they possibly can" are ignorant at best and hateful at worst.

Such an important policy like the plan to update Florida's standardized testing program should be debated on its merits -- and using the LGBT community to distract from the real issues will certainly fail.

While SAVE does not plan to take a position on the policy in question, we will hold Rep. Van Zant accountable for his anti-equality stance and his blatant targeting of the LGBT community.

We're pleased to report that Champions 2014 broke records for SAVE. Attendance was the best ever in the event's history, as was the sum raised in support of equality and the total value of goods donated towards the silent auction.

It couldn't have been possible without supporters like you. We thank you for that support. Because of you, I could stand up on stage to commemorate such an amazing year for equality.

Please join in the spirit of our TOGETHER campaign and stand with our Champions in support of pro-equality leaders in the critical 2014 elections.

SAVE kicks off TOGETHER 2014 campaign

Nearly 100 equality warriors took the the streets of South Dade this Saturday, including dedicated citizens of South Dade, members of SAVE's Board of Directors, and student groups from FIU, UM, and Johnson and Wales University.

Together the volunteers knocked on doors and educated voters about the injustices and discrimination LGBT people still face right here in our backyard. It isn't right, and the voters responded -- the volunteers collected hundreds of pledges to vote for pro-equality candidates!

SAVE Action PAC endorsees Representative David Richardson and district 8 County Commission candidate Daniella Levine Cava were there proudly supporting the movement. Saturday's efforts will put these trailblazers that much closer to winning elections to lead our community.

It was just the start of what promises to be a groundbreaking year for equality. SAVE hit the ground running on Saturday, and we won't stop until our voices are heard.

Will you make your voice heard in favor of equality this election year?
Stand TOGETHER with SAVE by signing up as a volunteer today!

Can't make it to any of our upcoming actions?
You can also do you part by making a donation today!