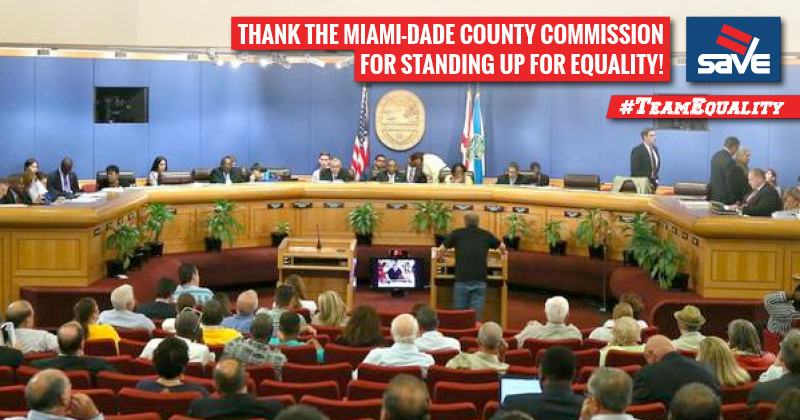 We are glad to report that the Miami Dade County Commission has just passed by a vote of 7-3 a key resolution -- introduced by equality champion and 2014 SAVE Action PAC candidate Daniella Levine Cava -- to begin the process of joining those pro-equality jurisdictions, like the Cities of Miami Beach and Wilton Manors, which have suspended business ties with North Carolina and Mississippi.

Add your name below to thank Commissioner Levine Cava, Mayor Gimenez and their colleagues on the Miami Dade County Commission for standing up for equality.

We commend Commissioners Daniella Levine Cava, Dennis Moss, Audrey Edmonson, Barbara Jordan, Bruno Barreiro, Sally Heyman and Chairman Jean Monestime for voting YES to take this action, which will help bolster the nationwide movement to overturn these discriminatory and anti-LGBTQ laws -- especially in addition to the action taken by the Cities of Miami Beach and Wilton Manors in recent weeks.

What we warned lawmakers would happen in Florida has come to pass in North Carolina, where top companies like PayPal, Lionsgate and Deutsche Bank have cut hundreds of jobs in response to the hastily-passed HB2 there.

The same is happening in Mississippi, where official government-funded travel has been banned by a growing list of jurisdictions that includes New York and Washington states, in addition to Miami-Dade County, Miami Beach, and Wilton Manors.

While similar proposals are dead in Tallahassee for now in part due to SAVE's vigorous advocacy during the 2015-2016 legislative session, you can be sure extremist anti-LGBTQ opponents will continue to push these awful bills.

We must remain vigilant and ready to make our voices heard when the time comes -- and we must give our all to support pro-equality leaders like those who stood up today at the Miami-Dade County Commission.

Thank you for your support.