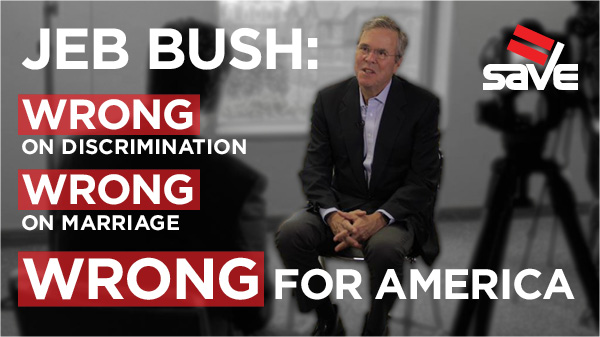 "This should not be that complicated."

That's what just-announced 2016 presidential candidate and former Florida Governor Jeb Bush replied when asked whether it’s OK for florists or bakers to deny services to same-sex couples who are getting married.

“Yes, absolutely, if it’s based on a religious belief,” he answered during a televised interview in response to the question from Christian Broadcasting Network’s David Brody, adding, "This should not be that complicated." Bush then reiterated his view that there is NO constitutional right for gay and lesbian Americans to marry.

Governor Bush: we agree that rights for LGBT Americans shouldn't be a complicated issue, but that's where our agreement ends.

Americans cannot afford to suffer under the radical anti-equality views of politicians like Bush -- he supports so-called "religious freedom" legislation like the kind that resulted in an economic and public relations disaster for Indiana earlier this year.

Today, Jeb Bush announced his 2016 presidential candidacy from our own backyard of South Florida. As Floridians, it's up to us to hold home-state politicians like Jeb Bush accountable for their anti-LGBT positions.

Our chance to prepare for the historic 2016 elections is NOW! Please give $25, $100, or whatever you can to help SAVE continue to fight the anti-LGBT attacks as the upcoming presidential campaign unfolds.