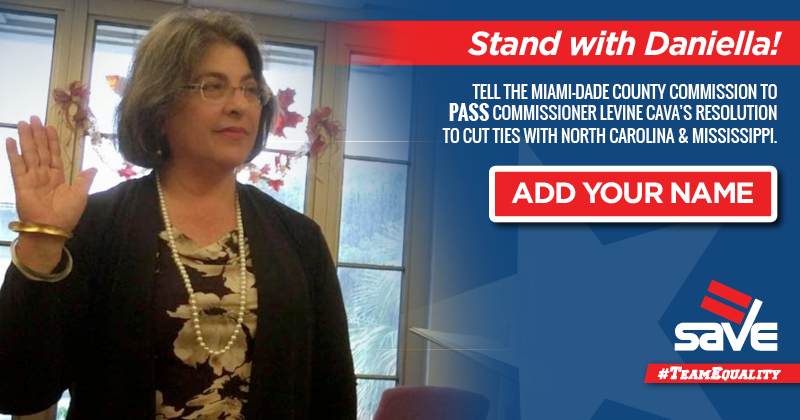 In response to the passage of these laws, jurisdictions across the county, including Miami Beach and Wilton Manors in our very own South Florida, have suspended business ties with North Carolina and Mississippi.

Commissioner Daniella Levine Cava has indicated that at the upcoming meeting of the Miami-Dade County Commission on May 3, she will introduce a resolution to join those pro-equality jurisdictions in suspending official County business with the states of North Carolina and Mississippi until those states repeal their recently-passed anti-LGBTQ laws.

The Commissioners must act swiftly in passing Commissioner Levine Cava's resolution, which will help bolster the nationwide movement to overturn these discriminatory and anti-LGBTQ laws -- especially in addition to the action taken by the Cities of Miami Beach and Wilton Manors last week.

Will you join Commissioner Levine Cava in urging her colleagues to suspend Miami-Dade County business with the states of North Carolina and Mississippi at the May 3 Commission meeting? Add your name below:

Tell the Miami-Dade Commissioners to suspend County business with North Carolina & Mississippi at the May 3 Commission meeting!