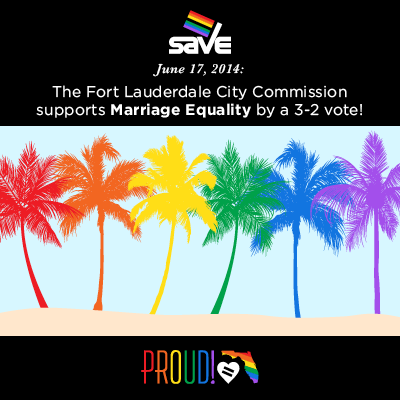 "If we're truly going to be an All-America city, we have to be a city for all Americans," said Commissioner Dean Trantalis, referring to an award the city recently won.

The measure wasn't without its opponents. Notably, on the record against the measure were Ft. Lauderdale Mayor Jack Seiler and Vice Mayor Romney Rogers, who as voting members of the Commission cast the two 'no' votes.

Speaking before the vote, Vice Mayor Rogers claimed that he didn't serve as vice-mayor "to be on the right side of history." Other speakers claimed that the nonbinding resolution would lead to polygamy and incest.

In the end, supporters outnumbered opponents of equality on the commission. SAVE is proud to thank Commissioners Roberts, Trantalis, and DuBose for their votes in favor of marriage equality for South Floridians this Pride Month.