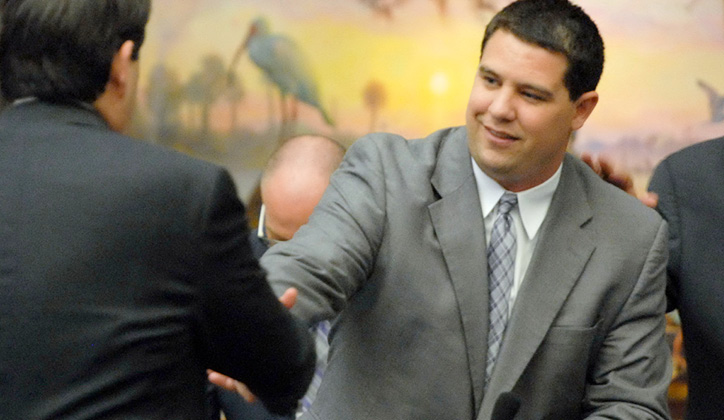 Florida Senator Travis Hutson of Palm Coast today joined Florida Senator Jack Latvala of Clearwater in becoming the second GOP Senator to co-introduce the Florida Competitive Workforce Act, a bill aimed at protecting Florida’s LGBT community against discrimination in the workplace, public housing and accommodations. Senate Bill 120 by Sen. Joe Abruzzo of Boynton Beach and House Bill 45 by Rep. Holly Raschein of the Keys, if passed, would update the Civil Rights Act of 1992.

“Thank you to Sen. Travis Hutson for his leadership and support of this pro-business, anti-discrimination legislation,” said Florida Businesses for a Competitive Workforce Coalition Campaign Manager Patrick Slevin. “To have two Republican Senators, and nine GOP House members leading the effort to ensure Florida remains competitive in the global marketplace is very encouraging as we head into the second week of Session.”

"The LGBTQ community still lacks non-discrimination protections in employment, housing and public accommodations," added Tony Lima, Executive Director of SAVE, South Florida's top LGBTQ advocacy organization and a key member of the Florida Businesses for a Competitive Workforce Coalition. "These fundamental areas of our lives, that many of us take for granted never having to fear being treated unfairly, are the corner stones of the freedom and opportunities that the American Dream lends to us."

“I have always been a vocal supporter of this pro-business issue and believe there is a fundamental flaw in a society that condones the firing of someone simply because they are LGBT,” said Sen. Hutson. “I am pleased to join Sen. Latvala and my colleagues in the House to co-sponsor this very important piece of legislation. While there are some concerns I have for others to sue unjustifiably, I am confident that will be addressed through the committee process.”

While it is illegal to discriminate in employment, housing and public accommodations based on race, color, religion, sex, national origin, age, handicap or marital status, the gay and transgender community is currently left out of statewide non-discrimination protections. The Competitive Workforce Act aims to address this by adding sexual orientation and gender identity to the law.