SAVE is proud to recommend former Congressman Joe Garcia for Representative of Florida’s 26th congressional district. Election Day is November 8! 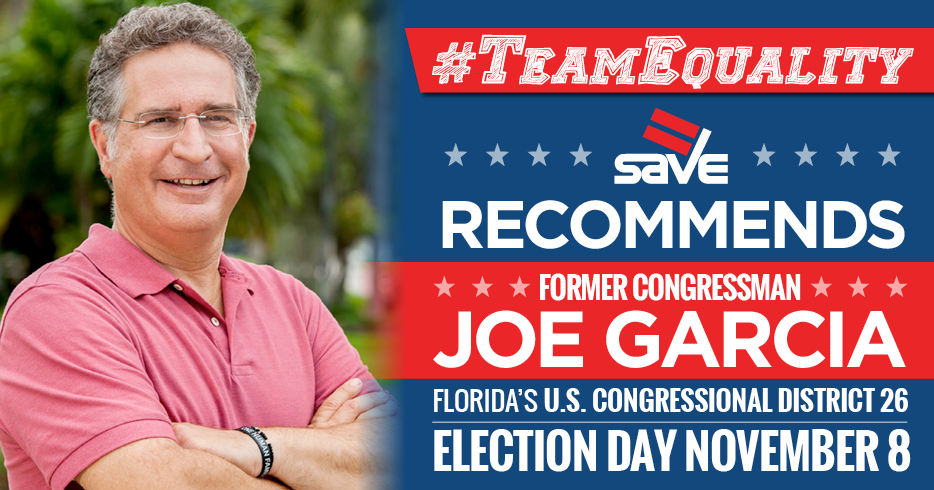 Joe was first elected to Congress in 2012 representing the old 26th congressional district encompassing southern and western Miami-Dade county as well as the entirety of Monroe County and the Keys.

During his term as congressman, Joe served South Florida’s LGBTQ community admirably, garnering SAVE’s Champion of Equality Award in 2013 for his sponsorship of the federal Employment Non-Discrimination Act and his efforts to protect LGBT immigration rights in the reform package under consideration.

Prior to his term in Congress, Joe stood out as an outspoken community advocate for equality. As Executive Director of the Cuban American National Foundation in 2001, he led the organization to oppose the repeal of the Miami-Dade Human Rights Ordinance. He appeared on Spanish radio and TV during the HRO fight in 2001, and did so again in 2008 on behalf of defeating that year’s statewide anti-equality marriage amendment.

Joe was defeated for re-election in 2014 by the incumbent Congressman, and his current opponent, Representative Carlos Curbelo. SAVE’s panelists had the privilege of interviewing both the current Congressman Curbelo and the former Congressman Garcia.

Congressman Curbelo has taken concrete pro-equality policy steps, such as his early support of SAVE’s Equality Network of businesses for workplace equality, and the LGBTQ community looks forward to working with him should he win re-election.

In the end, however, Joe Garcia’s extensive public record in support of LGBTQ equality -- as well as his solid pro-equality record in Congress -- persuaded our panelists in his favor. SAVE is proud to recommend former Congressman Joe Garcia for Representative of Florida’s 26th congressional district.

Don't forget: Election Day is November 8! Thank you for your support.