My Farewell to Exodus Int'l - Op Ed by Jaime Bayo 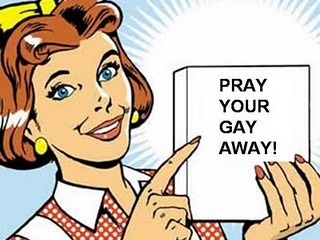 Wednesday night I heard that Exodus International — the world’s largest “ex-gay” ministry — announced during its annual conference that it will close. Shortly after, the organization’s president issued a public apology to everyone who has ever been a victim of “change therapy” meant to alter sexual orientation.

In an instant, I found myself back in my grandmother’s house —12 years old, kneeling with her on the floor of her living room, praying the rosary. In between the Hail Marys and the sorrowful mysteries, I inserted my own private prayer for God to take away my homosexuality. We would do this together almost every night, and each night I would ask God to make me straight.

Everything I had learned at church — a cornerstone of my Hispanic Catholic family — said that being gay is a sin, that it is somehow worse than other sins, but that if you are really committed to God you could overcome this great sin. Since 1976, Exodus International has spread that message to thousands upon thousands of young people and adults, telling them that in order to be faithful they have to denounce their sexuality. That homosexuality is a spiritual disease. That if you pray enough, starve yourself enough, endure enough physical and emotional pain, you can be saved.

As a young person, I often imagined what it would be like to try a “change therapy” program. I would hear horror stories of torture and lies, and I would be scared. But when I stared into the mesh screen in the confessional, as the pastor asked, “Is there anything else?” I would have to fight to keep the words “I’m gay” inside. I wanted to be accepted by God, by my family, by my grandmother who knelt beside me each night to pray.

In 1973, just three years before the birth of Exodus and only 40 years ago, homosexuality was removed from the Diagnostic and Statistical Manual of Psychiatric Disorders as a mental illness. The medical community made a very public statement that being gay or lesbian was not a disease. Now Exodus International has denounced “change therapy” and apologized for the “pain and the hurt” it caused victims throughout the years. Exodus joins thousands of congregations and faith-based organizations that have come to the realization that being gay is not a religious disease.

In just a few days we could receive a decision from the U.S. Supreme Court on same-sex marriage. Although the decision is unknown, there is an undeniable growing shift in support for LGBT equal rights. Citizens across this great country are stepping forward and affirming publicly that being gay is not a social disease.

I feel ever more confident that we are winning and that there will be a day in my lifetime when my doctor, my pastor, and my elected officials all agree that I am healthy.

I’m not evil, and I am worthy of the same rights as my grandmother. My grandmother last year came to a similar realization, telling me that even though I was a “different fellow,” she just wanted me to be happy and at peace.

Nothing brings me closer to my faith than taking a stand against the social injustices of our generation — a calling mentioned numerously in the Bible. It makes me proud to work for an organization that continues to lead the fight for LGBT equality through grassroots action focused on civil rights, parental rights, and relationship recognition. My life is overflowing with support and love from family, friends, and colleagues. Each and every day I am reminded that I am among the lucky few who are able to live my life openly and without fear.

You can rest assured that right now there is a young boy praying silently to God to take away his homosexuality. There is a girl at Bible camp who feels dirty and sinful when she changes in front of her bunkmates. There is a young person being sent away to an organization much like Exodus International. It’s happening because the leaders in our faith communities have given in to fear and hate above love and compassion. The antigay ideas taught at the pulpit then propagate through our communities and are ingrained in fabric of families. But today, there is one less hatefully misguided organization leading the charge against perfectly normal people who just so happen to be gay.

As Exodus International closes its doors, I join a chorus of voices sharing the same message: It is time for our religious and political leaders to embrace and respect our community. Exodus International will soon become only a sad part of our collective history. Thank God.

Jaime is the Development Director at SAVE Dade, a nonprofit organization dedicated to promoting, protecting, and defending the rights of LGBT people in Miami-Dade. He can be reached at [email protected]