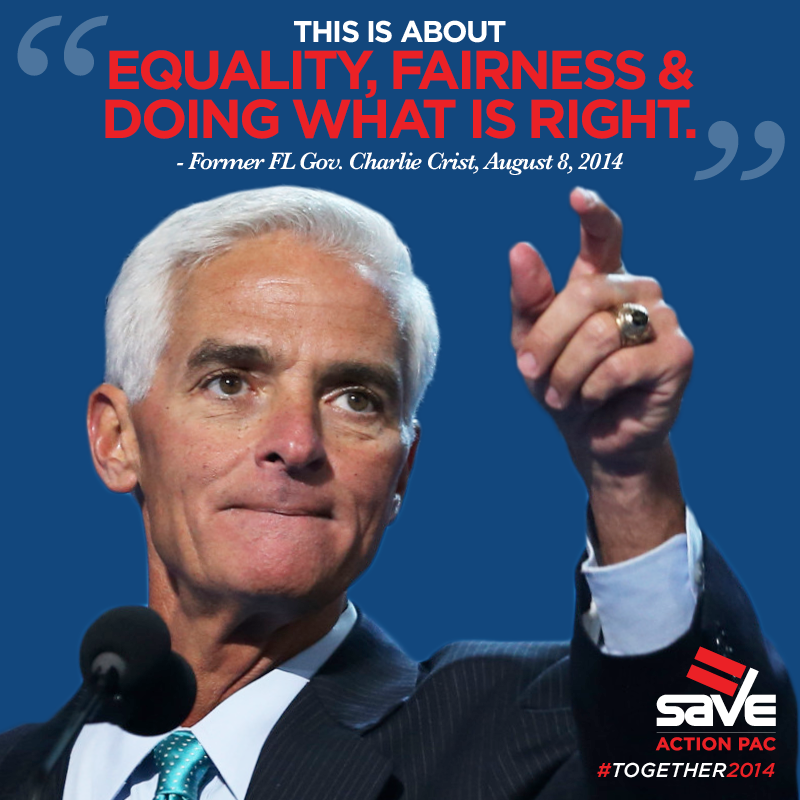 When it comes to winning equality for LGBT people, the path to victory is plain and simple: change hearts and minds.

That's why we're so proud to announce today SAVE Action PAC's endorsement of Charlie Crist for another term as Florida's governor.

Since his days supporting measures like the statewide ban on same-sex marriage, Governor Crist has come a long way. By 2010 he had boldly rejected the political risks and came out in favor of pro-equality policies like ENDA and the repeal of Don't Ask, Don't Tell.

It’s stories like these about winning hearts and minds that continue to inspire activists all over the state. Because of our movement's hard work engaging the community, we changed Governor Crist's mind. He has responded by putting in the hard work to prove his support for LGBT people.

Changing hearts and minds isn’t easy, and it’s one thing to say you’ve changed your mind, but entirely another to take concrete actions.

The Governor has put actions behind his words by announcing his support for marriage equality for all Floridians, including filing a friend-of-the-court brief on behalf of the gay and lesbian couples in the Miami-Dade Marriage Equality Lawsuit, and by promising executive action on equality on day one of his term.

The choice is clear: Charlie Crist is the pro-equality candidate in the race. We hope you'll join SAVE in proudly supporting him on November 4.