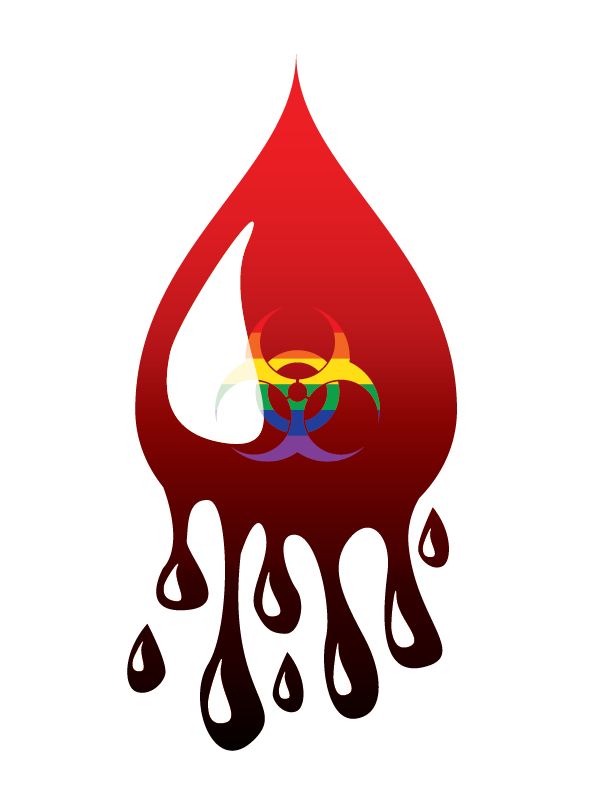 Every college or university with an active Greek life hosts an annual Greek Week, where participating Greek organizations compete against one another in various fundraising contests in support of an uncontroversial, unifying charitable cause.

One particular university in Dade County hosts its annual fundraising tournament, but additionally, it hosts a blood drive competition, where organizations compete to donate the most blood to the Community Blood Centers of South Florida in order to earn points towards winning the overall Greek Week.

A recent phenomenon in Greek life is the gay-friendly fraternity. The membership in such organizations is open to all male-identifying people regardless of sexual preference, as are most fraternities, but these in particular tend to exist as a safe space for gay and bisexual men who are interested in Greek life but are sometimes rejected by more traditional fraternal organizations.

I count myself as a member of such an organization. My fraternity rushes new members and participates in Greek events just like any other, but our membership skews heavily towards the gay and bisexual cohort.

We were founded only a few years ago by a handful of gay and bisexual men, but we have always worked hard to make our presence known on campus. That hard work paid off after our first Greek Week: we won some events outright and placed highly in the overall competition.

One event in which we did not place highly, however, was the blood drive competition. It’s a well-known controversy in the U.S. that giving blood is prohibited for men who have had “sexual contact” with other men since 1977, and is also deferred for one year for women who confess to have had “sexual contact” with such men (the same as for a person who confesses to having had sex with a prostitute).

Leaving aside the fact that donated blood is tested extensively and that it’s impossible for women to confirm or deny if their male sexual partners have had sexual contact with other men, this prohibition is generally rejected by the medical community. It is based off of antiquated and ignorant misconceptions of HIV as a “gay disease,” and only serves to restrict otherwise healthy and willing gay men from donating a potentially life-saving pint of blood to someone in need.  To top it all off, what exactly qualifies as “sexual contact”? Kissing? Heavy petting? “Dry humping”? Mutual masturbation? Oral sex? Penetration?

So as you can see, the blood drive portion of Greek Week is problematic for my fraternity. In light of this, the Greek Week board’s solution was to offer the option of finding someone to donate on his or her behalf. This “solution” was still problematic—it’s much easier to donate your own blood than it is to find someone willing to do it for you. But we grudgingly accepted, unwilling to foul an entire philanthropic week just because we considered one event discriminatory.

This brings me to my experience donating blood during this year’s Greek Week. I couldn’t find anyone with the time or willingness to donate on my behalf, so I decided I’d fudge the questionnaire in order to potentially save a life while at the same time helping my fraternity to compete. If that makes me a liar, so be it. I don’t consider my few experiences with other men (two, to be exact) as “sexual contact” in the sense as it’s written on the questionnaire.

But I couldn’t help myself. Next to where I checked ‘no’ on the questionnaire, I wrote the phrase, ‘it’s none of your business.’

This is where things got dicey. The technician in charge of my paperwork saw my scribble and asked, heatedly, “Why did you write this? Of course it’s our business,” to which I replied, “Really? Are you my doctor?”

That was the end of that conversation. With a harrumph, he signed off on my paperwork and gestured towards an open medical chair to begin my donation.

While my blood was being drawn, I found that every other technician I spoke to agreed that “Question 34,” as they know it, is a ridiculous intrusion into donors’ private lives given the fact that all donations are tested and that the questionnaire does not screen out other high-risk groups.

But despite all my bluster, here are the facts, per the FDA:

That bullet point in bold is key. The FDA says that if there were 2 million HIV positive donations, only one would go undetected. The argument goes that since 20 million transfusions are performed annually, just one undetected contamination is too high a risk to allow MSM to donate blood. But here’s the kicker: there are nowhere near 2 million HIV-positive blood donations every year. In fact, AVERT estimates that there are 1.2 million HIV-positive individuals living in the U.S.

Even if there is a chance that a contamination goes undetected in a year, it is so tiny as to be almost nonexistent because there are far less than 2 million HIV-positive donations each year. This does not even touch upon the fact that MSM are not the only people at higher risk for HIV. Many other such groups can still donate.

Taking everything into account, it’s my opinion that the FDA needs to take a look at its donor guidelines, because at present it’s banning a large and healthy population from donating blood for use in life-saving transfusions. Thankfully, under pressure from organizations such as the American Red Cross, America’s Blood Centers, and the American Medical Association, the FDA has periodically revisited guidelines that ban MSM from donating, although the most recent panel on the matter rejected a revision by a 7-6 vote. In spite of that disappointment, I think it’s only a matter of time before science and necessity overcome ignorance to effect an overdue change in the rules.