After a bombshell report by Freedom for All Americans identified the national Family Policy Alliance and its affiliated Florida Family Policy Council (FFPC) as ringleaders of a $150 million effort to push anti-LGBT legislation nationwide, South Florida LGBT group SAVE is calling on Florida Senator Marco Rubio to renounce his endorsement by Orlando lawyer and political insider John Stemberger, who leads the FFPC. 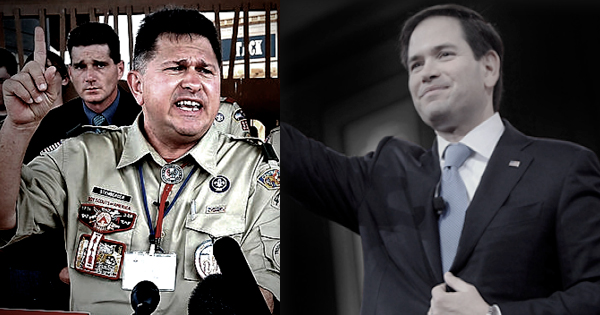 One of Florida's most notorious anti-LGBT activists, Stemberger directed "Florida Family Action," his well-funded network of extreme anti-gay donors, to support the re-election of Marco Rubio in a post shared on the Senator's own Facebook page on June 27.

"I'm honored to receive John Stemberger's endorsement," added the Senator in the accompanying caption pictured in the screenshot below: 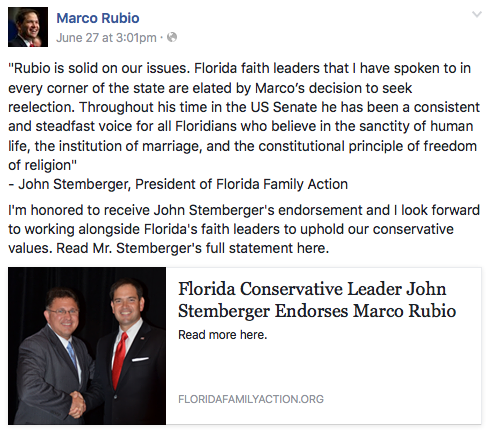 In response to the revelation of Stemberger's involvement in the coordinated nationwide effort to funnel cash into the political push for anti-LGBT legislation, SAVE Executive Director Tony Lima issued the following statement on Stemberger's support for Rubio:

I cannot overstate the threat that another six years of Marco Rubio represents to the LGBTQ community in Florida and nationwide. He is cozying up to the same John Stemberger who went after Florida's only openly gay legislator, State Rep. David Richardson, for supporting nondiscrimination laws -- calling them "weapons to punish Christians" which enable "sex offenders and pedophiles." The same John Stemberger who said that "two moms, or two dads, are an objectively inferior choice" when it comes to LGBTQ parents.

The report released today by Freedom for all Americans, entitled "Enemies of Equality," implicates Stemberger, as president of the Family Policy Alliance-affiliated FFPC, in a $150 million effort to push anti-LGBT legislation in 34 states alongside well-known leaders of Southern Poverty Law Center-identified hate groups such as Tony Perkins of the Family Research Council and James Dobson of Focus on the Family -- which is itself affiliated with Stemberger's Orlando-based Florida Family Policy Council, according to the FFPC's website.

In an effort to combat the financial support that SAVE expects anti-LGBT politicians to receive from Stemberger's network, the LGBT organization has launched its own effort to match and exceed that level of support from ordinary pro-equality Floridians under the hashtag #TeamEquality.

"By speaking together with one voice, we can make sure equality prevails," wrote Lima earlier today in an email to supporters. "It’s up to us to show Senator Rubio what REAL representatives of Floridians look like, and you can do that by making sure #TeamEquality has the resources we’ll need to WIN."

So far, SAVE Action PAC, the electoral arm of SAVE, has endorsed 27 pro-equality candidates in local races on August 30, with more endorsements to be announced soon. For more information about SAVE Action PAC's #TeamEquality 2016 campaign efforts, events, and endorsements, please go to save.lgbt/2016.