What do the Supreme Court rulings mean for Florida? 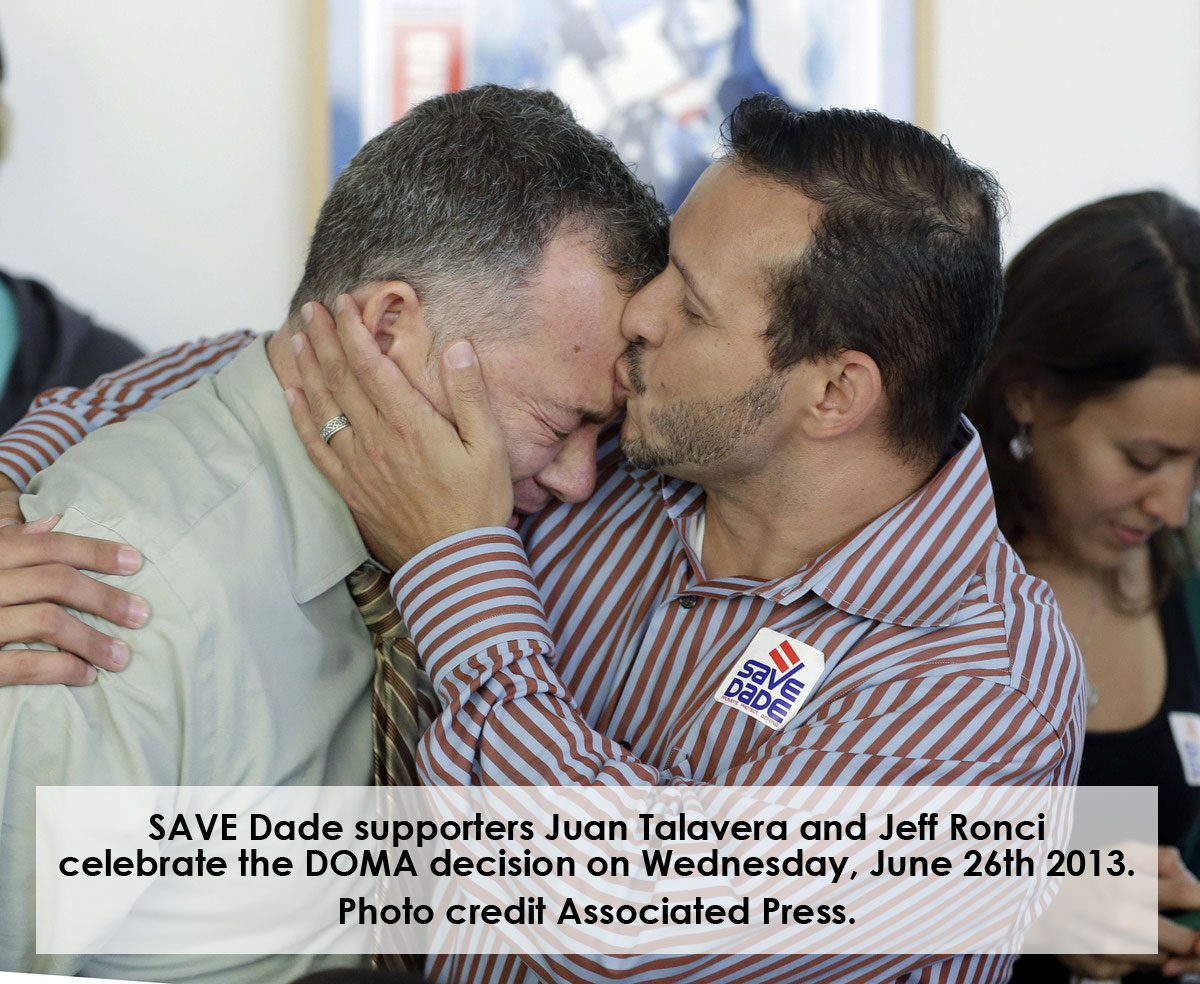 "The history of DOMA’s enactment and its own text demonstrate that interference with the equal dignity of same-sex marriages…was more than an incidental effect…it was its essence. DOMA wrote inequality into the United States Code.”

With those words published Wednesday, the Supreme Court of the United States exposed the Defense of Marriage Act for what it was: a law that had a sole purpose of discriminating---of creating a sub-class of citizens without the full rights afforded to all.  Since the Supreme Court published its decisions in the cases of United States v. Windsor (DOMA) and Hollingsworth v. Perry (Prop 8), equality advocates have celebrated a victory, and both sides have attempted to spin the decisions in an attempt to create talking points.  It is important that citizens arm themselves with the facts, understand what these two cases actually have done, and what they will mean for the future of this generation’s greatest debate.

The impact of these two cases is quite clear: (1) the Federal Government must grant full legal recognition of any same-sex marriage in any state which legally recognizes such marriages and (2) California is now among the states that will legally recognize same-sex marriages. The importance of those two facts should not be understated. By August, about 30% of the population will live in a state that recognizes same-sex marriages; the DOMA ruling clears the way for those people to enjoy all the rights and privileges conferred upon married couples by the federal government. The provisions of federal law which now must be applied to same-sex marriages in those states number over 1,000. Those provisions grant a host of very important rights that can impact the lives of same-sex couples in a wide range of ways, including rights regarding immigration, health care, taxes, and even greater protection from violent crime. In short, the rulings are a big win for any same-sex couples living in a state which recognizes such a marriage, and an especially big win for Californians.

The Immediate Impact for Florida’s Families

What the DOMA ruling means for Miamians remains to be seen, but it probably won't change much immediately for us locally. For Miami couples who have been married in a state which legally recognizes same-sex marriages, this case could end up having an effect; the Federal Government could decide to recognize such a marriage even though the State of Florida would not. The Respect for Marriage Act is an important piece of legislation pending before Congress that could help resolve those situations for Miamians. Additionally, expect the Obama administration to create a series of regulations that should provide some clarity for Miami LGBT couples in the next year. What the DOMA ruling does not do is force the State of Florida to recognize same-sex marriages granted by other states. The bottom line for Miamians remains largely unchanged: same-sex marriage will not be recognized in Florida until the state constitution is amended to allow it or the Supreme Court rules that prohibiting same-sex marriages is unconstitutional. It will take hard work from pro-LGBT advocates and organizations such as SAVE Dade to create an atmosphere where all of Florida’s families can enjoy the benefits of marriage.

How They Ruled and What It Means

While the result of a Supreme Court case is often very important to the people directly involved in and impacted by the case, the court’s reasoning is almost more important, as it tells us what type of precedent the case sets -- that is, what the impact of the case will be in the future, for cases that are not resolved by the court at the current time.

The Prop 8 case, commonly known as Perry, was decided on what most would call a technicality.  The District Court in California originally declared Prop 8 unconstitutional and, when neither the governor nor the attorney general of California chose to appeal, the proponents of Prop 8 -- the individuals who had placed the provision on the ballot, and who had been permitted to intervene to defend the provision -- were the only parties to file an appeal. The Supreme Court said that the Prop 8 proponents did not have the power to appeal the ruling, however, which had the effect of rendering the District Court ruling the final judgment on Prop 8. The substantive issues -- whether a state can deny marriage to same-sex couples, and whether gays and lesbians have a particular entitlement to equal treatment from the government -- did not factor into the ruling at all.  What this means is that the case will have little impact on the broader issue of same-sex marriage outside of California.

The DOMA case, on the other hand, was not decided on a technicality -- although it did include a somewhat notable detour. The Court’s opinion, written by Justice Kennedy, embarks on a lengthy discussion of states' rights, and the extent to which the federal government has the authority to create laws regulating marriage that are at odds with laws of states -- as DOMA is, in that it refuses to recognize marriages that twelve states (and the District of Columbia) now perform.  The Court recognized that domestic issues like marriage had historically been left to state regulation, and identified DOMA as “an unusual deviation” from that history. The Court thus established solid grounds to overturn DOMA as a federal intrusion on the historic power of states to regulate marriage -- but it stopped short of saying so, and made an abrupt turn.

Instead of relying solely on states' rights, the Court decided the case on equality and liberty grounds.  Invoking the Constitution's guarantees of equal protection and due process, it concluded that DOMA discriminated in “visible and public ways,” in that DOMA disparaged and injured the same-sex marriage couples whose marriages had been recognized under state law.  The Court held that no legitimate purpose for its creation could be found, using a harsh tone to completely reject Congress's stated purposes for enacting the law. It therefore concluded that the statute was unconstitutional.

Despite its conclusion that DOMA was unconstitutional, however, there was a noticeable lack of discussion and explanation from the Court as to how it had arrived at the conclusion that DOMA violated the Constitution.  It is particularly noteworthy that the Court took a very narrow approach in defining the class of individuals that Congress had discriminated against; instead of holding that Congress had discriminated against gays and lesbians more broadly, it focused on the fact that Congress had discriminated against individuals in same-sex marriages that had been made lawful by their State.  What this means is that there is little guidance for courts down the road, addressing future challenges to other laws discriminating against gays and lesbians more broadly, or even same-sex couples whose states do not yet permit them to be married.  In other words, the Court’s decision on DOMA may not be spectacularly helpful in resolving future cases about the constitutionality of state laws banning same-sex marriage.

The Future of the Debate on LGBT Equality

Even leaving aside the constitutionality of the laws in over 30 states banning same-sex marriage, there are many issues left unresolved that will need attention in wake of this ruling, and we should keep a close eye on them. For instance, imagine a Naval officer stationed in California who lawfully marries a spouse of the same sex and is then issued a transfer order to a state that does not recognize his marriage. Will the federal government continue to recognize his marriage in the new state, even though the state refuses to do so?  These type of issues, and scores of issues like it, will need to be resolved. The aforementioned series of regulations from the Obama Administration will start to provide the much-needed answers to those ambiguous and potentially troubling scenarios. If President Obama or Congress fails to address these issues, the courts will likely have to step in at some point down the road.

The elation and cheers from the LGBT community and its allies over Wednesday’s decisions were well-deserved, but proclamations of victory are premature. While these cases will change the lives of many, they do not ultimately resolve the ongoing national debate about same-sex marriage and equal rights for gays and lesbians in general.  What’s more, there is the fear that in hearing and ruling on these two cases, the Supreme Court -- and in particular its swing justice, Anthony Kennedy -- may decide that the Court should wait at least a few years before again weighing in on same-sex marriage. If that is the case, the divisive split among the states on same-sex marriage may continue for years -- if not over a decade -- before the Supreme Court again opines on gay and lesbian rights.

Thus, as the dust begins to settle from these two cases, three things are clear: History has been made, and a lot of people’s lives have changed for the better.  But the battle continues to rage on. That is why it is so important for our community to continue to support SAVE Dade and similar organizations working to promote, protect, and defend the rights of LGBT people in Florida.

Don Donelson is full-time faculty member at the University of Miami, and a member of SAVE Dade’s Young Guardian Society- a young professionals network with a focus on equality and philanthropic giving.