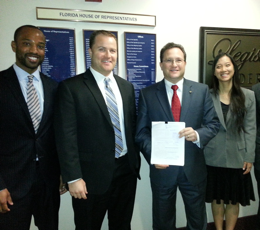 Newly elected SAVE Dade board member and University of Miami Miller School of Medicine student Hansel Tookes recently helped convince members of the Florida House to establish a syringe exchange program in Miami-Dade County. The Health Quality Subcommittee unanimously approved HB 735 by Representative Pafford that would establish a pilot program to provide sterile syringes to Miami's injection drug users. The bill is co-sponsored by Representatives Richardson and Campbell of Miami-Dade County.

Tookes' plea for the support of subcommittee members described Miami as a city at the intersection of a drug abuse and infectious disease epidemic. He pointed out that Miami has the highest rate of new HIV infections in the country and  over ten thousand injection drug users. Injection drug use is a risk factor for HIV, hepatitis C, hepatitis B and many other infections.

Tookes pointed out that the whole community is at risk from Miami's lack of a needle exchange program.  He coauthored a December 2011 study in the journal Drug and Alcohol Dependence, which compared syringe disposal in Miami versus San Francisco, a city with twice the number of IDUs and four syringe exchange programs distributing over 2.4 million sterile needles per year. Interviews revealed that Miami injection drug users were thirty times more likely to dispose of their dirty syringes in public. This finding was confirmed on walkthroughs where researchers found eight times the number of dirty syringes discarded in public in Miami. Tookes urged members of the subcommittee to support the establishment of a pilot needle exchange program to protect the health of the entire Miami-Dade community.